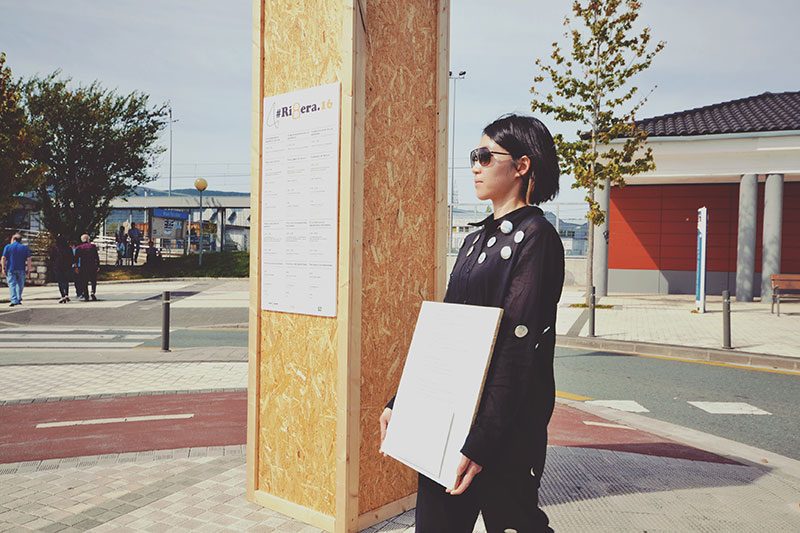 Normal Model Home | 너도 살고 나도 사는 집
Normal Model Home is the name of the project carried out by Jeongsoo Lim during her artistic residence at Bitamine Faktoria between September and October 2016.

The work shows the artist's vision of the Basque Country through an installation and a series of videos inspired by the combination of architectural forms and the movement of people. In addition, such deep-rooted sports as pelota, rowing, mowing and aizkora, all with a strong connection between the body and the object, have served as a reference for this exhibition.

Normal Model Home | paper, wood | installation | 2016
It is an installation made up of a space built from shapes and colours. The production method is based on collecting-sorting-listing, not on making. Gift paper with abstract motifs has been collected and classified into four categories (red line, yellow line, blue line and green line). The flow of the space connects with another line in a natural way. This feature is used in interior and house design. You are invited to observe the space by walking through it. This installation works when people enter it. It is a reminder of the motifs, shapes and colors that constitutes the city.

Direction for shape | single-channel video, 13 min | 2016
It is a collection of 10 short video pieces that show interventions and interactions in the city of colored shapes and objects. It includes the following videos: "Not the whole", "Vincent Robinson", "Now, city 01" and "02", "Raise the flag with the back", "Seven kinds of everything", "Rules, game", "Let's talk together 'somehow'", "Without terrace", and "When yesterday night my sister sent me KakaoTalk that she will be late at home because of her birthday party".

In addition, the artist from Seoul presented a record of the works produced within the framework of the RI8ERA project, an initiative that highlights the value of the river in Irun and its memories through various contemporary art practices. On one hand, the installation “Ask : Respond” and the performance “Give me your name” made in the surroundings of the Avenue Bridge on September 24; and on the other hand, the installation “Something on everywhere” placed in the CBA cultural center in October. Jeongsoo Lim was born in Seoul, South Korea, in 1988 where she lives and works. She graduated in Fine Arts (Visual Arts) from the Korean National University of Arts (2015), and until now she has done several residencies: at Kura Studio (Fukuoka, Japan) and Bitamine Faktoria, among others. For the past four years, she has been a member of an exhibition group of young artists. She exhibited twice individually, both times in Seoul. Lim's work explores the relationship between sculptures in spaces and how the body experiences them, emphasizing improvisation and the connection between the body-object-space trinomial. In a nutshell, her work reflects on the space we live in, the whys and the hows we inhabit it. [www.limjeongsoo.com](https://www.limjeongsoo.com/2016)